Intellectual property registration and protection is essential to guard invention. In case no legal protection is provided to such creative innovations, then the individual would not be able to reap the full benefits of their inventions and creativity would suffer as a result.

Trademark, one of the branches of IP is a mark or symbol which differentiate the goods or services of one proprietor from that of another. In short trademark signifies the brand, name, with which are associated the goodwill and reputation of proprietor business. This makes Trademark registration an important part of IP.

In INDIA the trademark registration is looked after by CONTROLLER GENERAL OF PATENTS DESIGNS TRADEMARKS, MINISTRY OF COMMERCE AND INDUSTRY, GOVERNMENT OF INDIA. Government has taken every possible step to simplify the procedure of registration for trademark . Recently the controller general office has released its annual report for 2017-2018 which highlight the extent of activities undertaken by office. 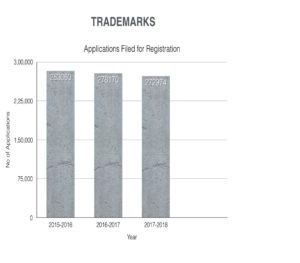 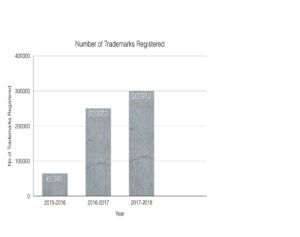 There are five branches of CONTROLLER GENERAL’S office including the head office at MUMBAI. The maximum applications have been filed at Delhi branch and minimum at Kolkata branch. As far as the number of Trademark registered are concerned, maximum have been in the field of medical , pharmaceuticals , veterinary and sanitary substances etc. with a total of 43371 trademark being registered while the minimum registration has been witnessed by musical instrument (other than talking  machines and wireless apparatus) with as low as 545 mark being registered.

Controller General’s office not only looks after the registration of Trademark, but also review the application for renewal of trademark, scrutinizes the opposition filed by any third party against the trademark published in the journal and settle down the dispute related to the trademark registration if there is any . Thus the office of Controller General is the most important office dealing with all this issues related to not only Trademark but every other branch of Intellectual Property.